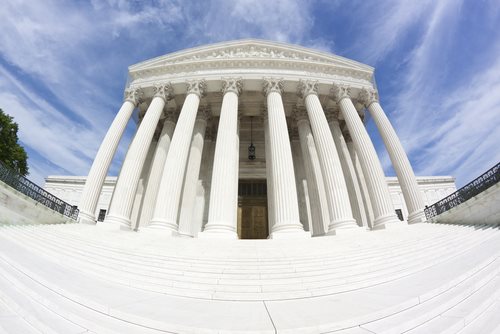 The Background of Wallace v. Jaffree

Wallace v. Jaffree was a landmark Supreme Court case that revolved around the issue of silent school prayers.

An Alabama statute was introduced that authorized teachers, in all school districts, to set aside on minute at the start of each school day to conduct a silent prayer or silent meditation. Ishmael Jaffree, an American citizen and father of three Mobile County public school students, filed a suit on May 28, 1982 against the mobile county School Board and various school officials. Jaffree sought an injunction and a declaratory judgment that would restrain the defendants from “maintaining or allowing the maintenance of regular religious prayer services or other forms of religious observances in the Mobile County Public Schools in violation of the First Amendment as made applicable to states by the Fourteenth Amendment to the United States Constitution.”

The following is a case profile of the legal trial eponymously titled ‘Wallace v. Jaffree’:

Date of the Delivery of the Verdict: Wallace v. Jaffree was decided on January 21, 1974

Legal Venue of Wallace v. Jaffree: The United States Supreme Court by way of the Court of Appeals for the Ninth Circuit

The enforcement of a silent prayer on school districts throughout a given state is a violation of the 1st Amendment to the United States Constitution which states that an individual is free to practice any religion they so choose.