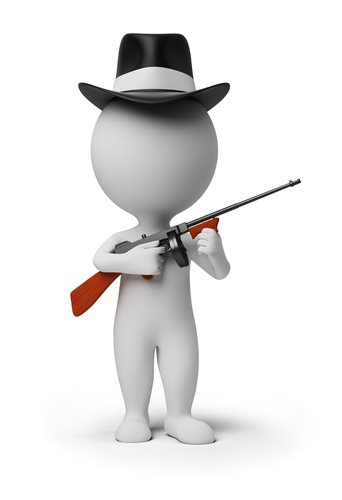 Al Capone is viewed as one of the most notorious and recognizable criminals in the history of the United States; many historians and law enforcement agents maintain that the name ‘Al Capone’ is oftentimes synonymous with the modern institution of organized crime. Throughout his criminal history, Al Capone is considered to have evaded a bulk of criminal charges and convictions; upon his apprehension, law enforcement agents found themselves unable to charge him with anything but tax evasion – however, the conviction of tax evasion was responsible for Al Capone’s incarceration. Although considered to have undertaken a wide range of criminal activity, Al Capone is primarily recognized for both his participation and masterminding of the smuggling of alcohol during the time of prohibition in the United States:

Al Capone is considered to have fronted and organized one of the foremost and illegal smuggling operations of smuggling; between 1920 and 1932, a legislative ban on alcoholic beverages  was put in place by a the Federal Government of the United States; Capone’s racketeering was considered to be a reactionary response to prohibition, which facilitated the availability of alcohol

Al Capone was also considered to be a ‘Bootlegger’, which is an individual participating in the illegal activity of smuggling that is conducted through secretive and clandestine means

The criminal activity – both structural and commercial in nature – involved the illegal provision, sale, and exchange of a wide variety of illegal and unlawful undertakings, ranging from the smuggling of alcohol to the organization of prostitution rings

Subsequent to the finding of a ‘guilty’ verdict with regard to his charges of tax evasion, Al Capone was sentenced to an 11-year prison sentenced to be served in the United States Penitentiary in Atlanta, Georgia; in addition to this sentencing, the presiding judge mandated that the liens and repossession notices were to be placed upon the estate of Al Capone – however, the following events took place with regard to the conviction and sentencing of Al Capone:

Upon the repeal of prohibition as expressed within the 21st Amendment of the United States Constitution, Al Capone was forbidden from communicating with any individuals perceived to be former criminal associates with regard to his smuggling endeavors

On August 11th, 1934, Al Capone was transferred to Alcatraz State Penitentiary within which he was incarcerated until January 6th, 1939

On January 6th, 1939, Al Capone was moved to the Federal Prison in Terminal Island, California within which he served a year’s time; he received an early parole on November 16th, 1939 – upon parole, he resided in Palm Island, Florida until the time of his death

Although certain Al Capone Biography suggests that a bulk of Al Capone’s estate was repossessed by the United States government, many assumed that a vast fortune remained in his possession, which was hid from law enforcement agents; however, this claim was neither substantiated nor proven

Subsequent to his parole, Al Capone continued to reside in Florida; reports of the final years of his life maintain that he was deemed unfit to continue his command with regard to the criminal organization for which he was once responsible

Close family and friends reported that prior to his stroke, he had undergone a traumatic degree of mental degradation; reports outlining the details of Al Capone’s final years illustrate that he displayed symptoms of insanity, which included ranting, raving, and paranoia