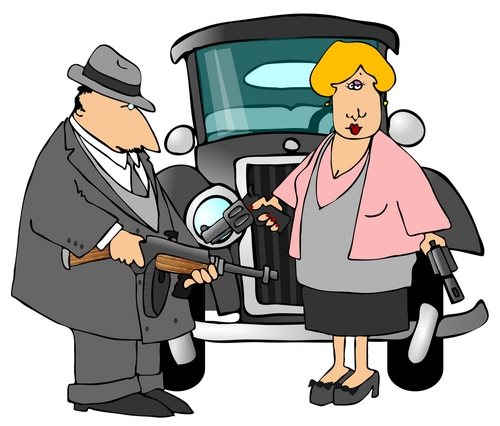 Who were Bonnie and Clyde?

Within their 2-year string of criminal activities, Bonnie and Clyde were considered to be responsible for a wide range of criminal activity; furthermore, the couple managed to evade police capture several times – however, this oftentimes resulted in the murder of both law enforcement agents and civilians

Subsequent to their criminal activity began in 1932, Bonnie and Clyde were never arrested

The following is a case profile of both the crimes of Bonnie and Clyde, as well as a legal classification of statutory legislation associated with their respective case:

Residence: Bonnie and Clyde undertook residencies across the span of the United States in order to avoid capture

Criminal Charges: Bonnie and Clyde were accused of the following crimes:

Kidnapping and Abduction; the illegal act of the abduction of an unwilling or unknowing individual at the hands of another individual or entity

Armed Robbery; the use of a deadly firearm in order to forcibly steal possessions and belongings belonging to another individual or entity

Resisting Arrest; the fleeing or stifling of the arrest process enacted by a criminal with regard to a resisting officer or law enforcement agent

Assault; the harming or injuring of one individual by the hands of another

Attempted Murder; fatally-harmful action undertaken in order to cause the purposeful death of another individual

Notable Details and Personal Information: The following persons were associated with the criminal activity undertaken by Bonnie and Clyde:

Raymond Hamilton; a friend of Bonnie and Clyde who accompanied the couple until his arrest

Ira Barrow; the brother of Clyde Barrow who accompanied the couple until he was killed by police

William Daniel Jones; a friend of Bonnie and Clyde replacing Raymond Hamilton subsequent to his capture

Blanche Barrow; the wife of Ira Barrow accompanied the couple until her capture