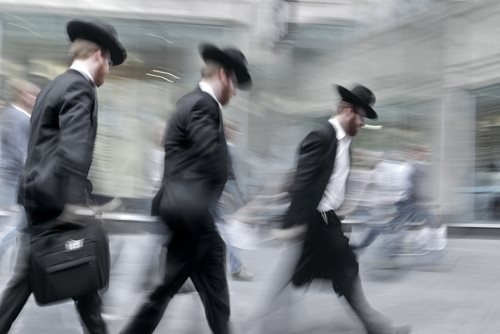 Who is Leo Frank?

Leo Frank, born April 17, 1884, was a Jewish-American businessman who was lynched by a party of prominent citizens in Marietta Georgia. The vicious and hateful treatment of Leo Frank and his subsequent lynching turned a spotlight on anti-Semitism and hateful acts based on religious beliefs in the United States. The lynching of Leo Frank ultimately led to the founding of the Anti-Defamation League.

Mary Phagan was a young girl who worked in a mill that was operated by her family. Phagan left school at the age of 10 to assume a job at the mill. After working in the mill, Phagan took a job with the National Pencil Company, where ran machines that inserted rubber erasers into the pencils’ metal bands.

Mary Phagan worked in the metal room, down the hall from Leo Frank’s office. Around noon on April 27th, the factory’s security guard went to the factory basement to use the facilities where he discovered the dead body of Mary Phagan. Her body was savagely beatn, and a seven foot strip of wrapping cord was tied around the young girl’s neck.

There were two notes found next to Phagan’s head. The notes, which were written in gibberish, were believed to a ploy to falsely accuse the black security guard who discovered the body.

When the guard was interviewed on suspicion of leaving the note, the authorities realized that the man was not the murdered. With no murder suspect in hand, the suspicion gradually fell on Leo Frank. The authorities believed that Frank was the culprit because he had developed a flirtatious relationship with Phagan and was extremely nervous when questioned.

On July 28, 1913 the murder trial commenced in a Georgia courtroom. Leo Frank was represented by eight lawyers. The prosecution’s predominant theory cited that Leo Frank was the murdered and the murder notes were dictated by Frank to an African-American janitor to effectively pin the crime on the man. The janitor, who was kept in custody and questioned by police, changed his story multiple times but finally claimed that Leo Frank promised him $200 dollars to write the notes.

On August 25, Leo Frank was convicted of murder. Shocked by the verdict, Leo Frank appealed to the Georgia Supreme Court. The United States Supreme Court denied this appeal as a writ of habeas corpus sought by Frank’s lawyers. Months later, William Smith, the lawyer for the African American janitor announced that he believed that his client had murdered Phagan. A writ of error was issued, which allowed Leo Frank to appeal the U.S. Supreme Court to hear an appeal in April of 1915. On April 19, the appeal was denied on a 7-2 vote. Originally Leo Frank was sentenced to death, but after further review of the evidence the governor of Georgia commuted Frank’s sentence to life in prison.

The Lynching of Leo Frank:

A group of prominent men in Georgia organized themselves into a group called the “Knight of Mary Phagan”. The men recruited 25 to 28 other men, who possessed necessary skills, to effectively kidnap Leo Frank from prison in hopes of lynching him.

On the afternoon of August 16, eight cars arrived at the prison shortly before midnight. The team executed an elaborate plan to remove Leo Frank from prison; when they got to Leo Frank they handcuffed him and tied his ankles together. They removed Leo Frank from jail and hung him from a tree that faced Mary Phagan’s home. Several hundreds of people viewed the lynching for they assumed Leo Frank was the murderer.

Nearly seventy years later, in 1982, Alonzo Mann, who was Frank’s office boy, told the authorities that he had seen the janitor alone at the factory, carrying Phagan’s dead body.